“You see all the red splotches on the ground?” asked Jacob as we walked the streets of Kainantu.  “It’s Betel Nut spit.”

“It’s a big thing here,” he continued, unfazed, “people take a Betel Nut, chew on it, and then bite off a stick of lime salt.  There’s a chemical reaction which produces red spit and something like the high you’d get from drinking too much coffee and too much wine at the same time.  You’ll see people selling it on the street.  And it’s addicting.” 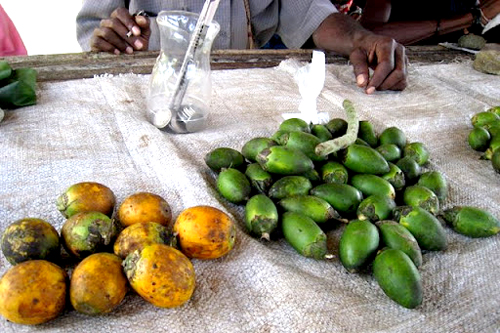 Not only did we see people selling it, about two of every three people we saw smiled at us with red teeth (the bones themselves were not blood-colored, mind you, but all the juice around them was… either way, it was an alarming sight).

When I returned, I did a bit of research on the Betel Nut craze and found a most inspiring legend about how it all came to be.  Here’s my version of it (which is only a bit different than the Vietnamese version):

Once upon a time, in a land not so very far away from here, lived a pair of brothers.  Identical twins they were, and their likes and dislikes were one and the same.  If the first loved the taste of pomegranates, it could be counted on that the second would love them just as well.

This was deemed a charming trait until women became involved.  For whenever one brother liked a woman enough to marry her, the other wanted nothing less than to marry her himself.  And after several marriage proposals were turned down (for the women could never decide which brother they liked better, and really could hardly tell the difference between the two), one fair maiden finally accepted the offer of the first.

At the news of this, the second brother stole out in the dead of night and convinced the woman to have the wedding on the very next afternoon (two days before the first brother’s wedding).  Thinking this was the same brother, the woman agreed, and the marriage went off wonderfully well.

Later that same day, though, the second brother realized something.  Since he and his brother were almost one and the same, and he very much liked himself and wanted the best for himself, he could do no other than like his brother very much and want the best for him as well.  Plagued by this dilemma, the second brother abandoned his new bride and headed for the hills.

When the first brother found out what happened, he postponed the wedding (this is where the Vietnamese version says, “For while wives can be replaced, brothers cannot.”) and headed off to find his closest of kin.

Meanwhile, the second brother had (“driven by his guilt to insanity”) promptly died.  When the first brother found the second lying dead at the base of a tree, he took his place (throwing his brother into a nearby river) and immediately turned into a pillar of limestone (why this happened is still unclear to me).  He looked, I am told, something like this:

The would-be-wife showed up herself soon thereafter, and seeing a man who was either her lover or the brother of her lover (for she knew not which), floating down the river and the other one just upstream in the form of a limestone block, despaired and beat her head against a tree.  After a few hours of this behavior, she too died.

For obvious reasons, the woman then became a betel vine – and grew round the tree where her would-be-husband sat as a block of limestone.

Not too long after, a Vietnamese emperor showed up (having heard this strange tale) and decided he could help the situation by eating part of the husband and part of the wife together whilst contemplating the tragedy of life.  But instead of feeling depressed, he suddenly felt elated, and his spit turned the color of blood.   Like a modern day English Professor, he immediately assumed this had some symbolic meaning, and declared that the blood-colored spit meant there was a bond in marriage as strong as the bond in brotherhood.

Meanwhile, the other brother floated out to sea and was devoured by sharks.

And that, my friends, is the legend of the Betel Nut.  (I added the bit about the sharks.)

7 thoughts on “The Betel Nut Craze”