In preparation for an upcoming Sports Tournament, this week is Spirit Week at the high school.  When I was a high-school student, you should know, I never supported the idea of “school-spirit.” To me, it always felt like a ploy to promote artificial patriotism.  And to make things worse, our scandalous dance team (and yes, they were scandalous) always managed to show up at the pep-rallys.  Either way, I’m happy to say that no such feelings have followed me here (in part, I should mention, because we do not have a scandalous dance team here).

And today was “Come as Everything but Yourself” day.  The phrasing, I admit, was a bit confusing – and the English department decided to take off three points for word choice as soon as we heard the announcement – but it essentially allowed us to come as anyone or anything we jolly well pleased.

After attempting to create a costume involving everything from a coat of wool to an eskimo hat, I gave up on the idea and invaded the school prop-room.  There, I found just what I needed to become a Court Jester. 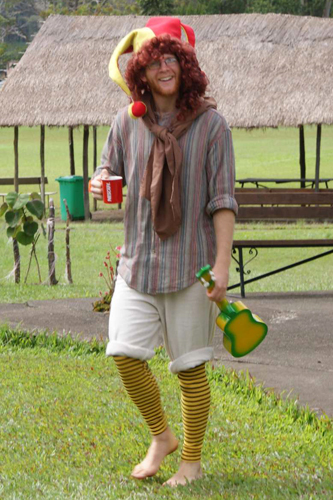 With ukulele in hand, I found a stump in the middle of the school grounds, sat upon it, and strummed merrily away. 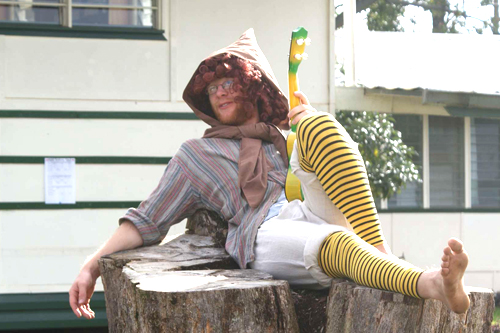 The problem was that here, in the heart of Papua New Guinea, a few of my best and brightest students hadn’t the slightest idea what a court jester was.  Which led some of them to speculate that I was either a leprechaun, an elf, or (no joke) a chicken.

I can’t make these things up.

If, by the way, you were wondering what the Flagon with the Dragon has to do with anything, look no further than the 1956 film The Court Jester, which cannot be more highly recommended on the entertainment scale.  Here’s a short clip for you:

16 thoughts on “The Flagon with the Dragon”