Do not give a mouse a cookie.  About a month ago, I had a single mouse take up residence with me in my homely house – and now – after exterminating most of his closest kin, I am still tormented by his second-cousin’s uncle.

A mouse – small, furry, and infinitely lovable (especially after reading The Mouse and Motorcycle to Amanda’s second graders) – scurried across my kitchen floor one day in February.  I thought little of it.  A mouse is a mouse after all, and he needed a home as much as I, so I let him have whatever crumbs he could find.  This behavior was not smiled upon by my fiancee, but she too let it slide.

One morning I woke up, and there, in the middle of my kitchen floor, lay the poor creature himself – legs sprawled out and quite beyond resuscitation.  “See -” I told Amanda, “No harm done.”

Within a week, two more mice were spotted – and neither had any respect for my crackers.  Since no mice traps were to be found in the house, we resorted to designing our own.

The first was akin to a primitive squirrel trap – complete with a bread pan, a stick to hold it up with, and a long string – and, of course, some cheese underneath.  Since I didn’t have the patience to sit all day holding the string, though, the mice just stole the cheese whenever I was in another room.

Next, we tried a large bowl (surely he won’t be able to climb out of this) with cheese and crackers inside, a long cutting board ramp leading to it, and a trail of crumbs for him to follow.  The next morning, the cheese was gone, but everything else looked exactly how I left it.

In despair, I finally broke down and bought a rap trap, since the store here was all out of anything smaller…

Seven mice later, only one mouse remains – and the survival of the fittest has certainly played its part.  I woke up yesterday morning to find my trap reduced to rubble: 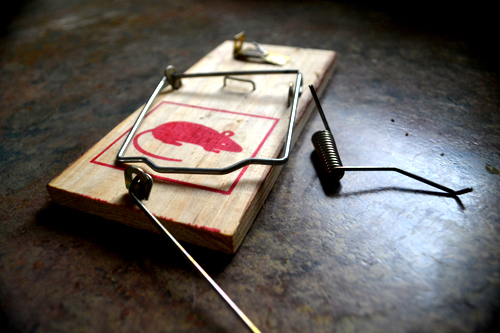 Friends and family, young and old:  Do not give a mouse a cookie.

8 thoughts on “If You Give a Mouse a Cookie…”